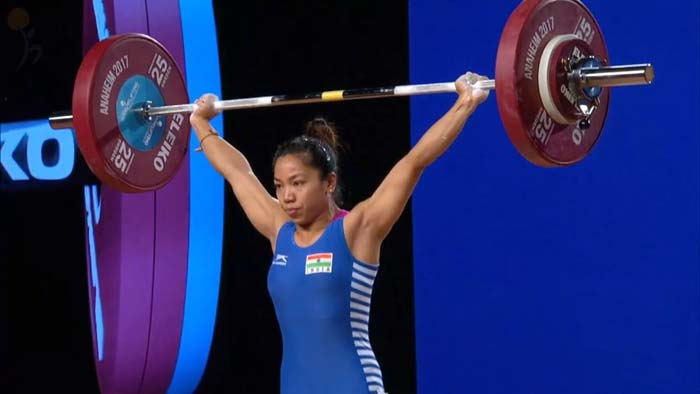 Imagine this — as a sportsperson, you work hard your whole life in order to compete on the world’s biggest stage. Your hard work pays off and you qualify for the biggest stage of them all — the Olympics.

Then at the pinnacle of your lifetime goal, you suddenly falter, and mind you, the entire world is watching as you do so. You’ve failed so miserably that all you can do is run for cover, run away from the very stage you dreamed of being on. Failure may be a stepping stone to success, but humiliation and heartbreak is definitely a hard pill to swallow. How you bounce back is indeed what differentiates the good from the great.

Meet Saikhom Mirabai Chanu, India’s Golden Girl. She won gold at the World Weightlifting Championships in USA last November, becoming only the second Indian weightlifter to win gold at the World Championships after Karnam Malleswari did the same 22 years ago in China. Chanu lifted 85 kg in snatch and 109 kg in clean and jerk to total an impressive 194 kg in the 48 kg category and in the process set a new national record in clean-and-jerk. Her own previous record was 108 kg in June last year.

During the medal ceremony, Chanu broke into tears while seeing the tricolour from the podium. “I was sure of winning a medal but never thought that I would end up finishing with gold. So when I saw the flag after wearing the gold medal around my neck, I just could not stop my tears. I got very, very emotional,” she said. “I have been training hard in Patiala, not having gone home for a long time. But it all seems worth it,” she added.

And she even skipped her sister’s wedding to participate at the world championships. “When I spoke to my mother after winning the medal, she started crying as she knows what all I have been through. She was happy that missing my sister’s wedding has not gone in vain,” Chanu said.

Hailing from the tiny state of Manipur, this diminutive lifter is all about comebacks. At the Rio Olympics, Chanu failed to even lift her entry weight of 104 kg in clean and jerk to end her 48 kg category event as DNF (Did Not Finish).

“I had really bad luck in Olympics. I could have won a medal. At the Olympic trial I had scored 192, if I could have done that I would have won silver but I couldn’t. It was my first Olympics and I got nervous,” she said.
Disappointed as she was, the lifter from Imphal decided that she was not going to give up even if she failed on the biggest stage.

Read the full article by subscribing to the print magazine or the digital edition.