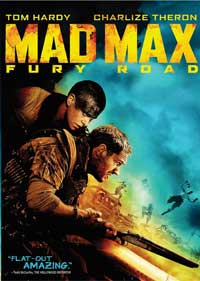 If you followed the Mad Max series over the years, you would treasure each film like solid gold. This series of films has more than a cult following, with a varied set of viewers who would love the adventure which unfolds before them. The new flick offers loads of action sequences all wonderfully shot, the locales, breathtaking and cinematography, simply out of this world. Miller, the man responsible for the series, gives you an edge of the seat thriller once again.

Former policeman, Max (Tom Hardy), is captured by the War Boys tribe commanded by the Immortan Joe (Hugh Keys Byrne) and assigned to be blood donor for the Nux (Nicholas Hoult) who is sick. Imperator Furiosa (Charlize Theron) is ordered by Joe to head on an excursion into the desert to collect gasoline. Furiosa drives a tank truck out from the Citadel and once out from his clutches, she changes the course of her destination and flees with five slave women hidden in the truck to her homeland Green Place. Immortan Joe commands his army of men, headed by Nux, to hunt down Furiosa. Nux chains Max to his car and leads the way. The army manages to catch up with Furiosa in a nail-biting car chase that ends with the army losing out and Max succeeding in getting off the car. But he is chained to Nux and is forced to drag him along. He sees Furiosa and the five women and decides to flee in their truck. But there is a secret to operate the truck which Max does not know. He finally teams up with Furiosa, and after a fist fight with Nux, Max leaves him in the desert. When Joe’s gang arrives, they retrieve Nux and the chase to find Furiosa begins all over again.

Will Max and Furiosa escape from Joe’s gang? Find out in this high octane flick with its deadly action.

At the 88th Annual Academy Awards this year, it was a night of success for the Australian film, winning six awards from its ten nominations. The film nabbed the Best Costume Design, Production Design, Makeup and Hairstyling, Film Editing, Sound Editing and Sound Mixing awards, but missed out on Best Picture, Best Director, Visual Effects and Cinematography.

Of the 24 categories devised by the Academy of Motion Picture Arts and Sciences, 10 categories featured Mad Max: Fury Road, making it the film with the highest number of nominations and wins ever achieved by an Australian film.

Verus Ferreira
Journalist at Music Unplugged
Verus Ferreira covers the hottest desi and international artists for The Teenager Today. Passionate about music, he is the author of The Great Music Quiz Book and The Great Rock Music Quiz Book. A freelance journalist for over 27 years, he also contributes to musicunplugged.in

Verus Ferreira covers the hottest desi and international artists for The Teenager Today. Passionate about music, he is the author of The Great Music Quiz Book and The Great Rock Music Quiz Book. A freelance journalist for over 27 years, he also contributes to musicunplugged.in